Title: Endangered Languages and the Land; Mapping Landscapes of Multilingualism

The Vigdís International Centre for Multilingualism and Intercultural Understanding and the Foundation for Endangered Languagescordially invite scholars, community organizations and community members working on the revitalization of endangered languages, their documentation and archiving to join the International Conference on “Endangered Languages and the Land” that will take place in Reykjavík, Iceland, on 23-25 August.

This is “FEL XXII”, the Foundation of Endangered Languages’ 22nd issue of a series of yearly conferences, for which printed proceedings will be published.

The conference language is English.

Madame Vigdís Finnbogadóttir, former President of Iceland and UNESCO Goodwill-Ambassador for languages, and Madame Eliza Reid, the First Lady of Iceland, will address the participants at the opening of the conference.

The full digital proceedings are now available for free download at http://www.elpublishing.org/book/endangered-languages-and-the-land.

Themes of the Conference

Endangered Languages and the Land

There is a strong connection between languages and the places where they are spoken. Land is a key part of the identity of a language speaking community. The lexicon and structures of a language are shaped by speakers’ appreciation of local geographical and ecological features. Contact-induced language change can reflect the ways that geography has influenced patterns of contact. Topo­nymies (place naming practices) reflect the languages that are or were spoken in a territory. Today, the availability of a territory where a language is ‘at home’ is one of the key factors for its vitality. In countries where Indigenous peoples seek land rights, their affiliations with languages can be factors in success.

The conference will pose questions such as: how do language endangerment scenarios vary in different regions in the world? What roles do land (or lack of it) play in speakers’ continued use of their languages?  To take one example, many Indigenous communities in Australia have immutable connections between language and land, and language affiliations follow from people’s relationships with land. In other parts of the world, scattered communities can retain their identity through sharing a common language communicated across distances.

How can we make relationships between language and land visible? Language maps are a frequently used tool. However, current practice in language mapping needs to be further developed.  Most current language maps use either points or bounded areas (usually non-overlapping) to represent the location or range of individual languages – but the true language landscape is typically much more complex than that.

One reason for that is multilingualism. In many parts of the world, there are complex layers of languages that perform complementary functions in the life of communities. Many individuals are multilingual, whether as Indigenous people, members of a minority speaking a heritage language, migrants bringing their language into the diaspora, as language learners in a globalized world, or people interacting on-line in a lingua franca with the global community.

The conference encourages papers describing innovative approaches that seek to represent these much more intricate patterns through mapping or by similar means, making use of digital technology or other cartographic methods and devices. Proposals could address questions such as: How can diglossia be shown? How can we better research and display the distribution of domains where languages are used? How can we visualize language shift and other changes over time?

This year marks twenty years since the publication of Nikolaus Himmelmann’s seminal paper “Documentary and Descriptive Linguistics” in Linguistics. Since then, Language Documentation has developed, mainly as a response to the need to make lasting records of the world’s many endangered languages, and to support speakers of these languages in their desire to maintain them. Funding programmes such as DOBES, ELDP, and DEL have supported language documentation activities with language communities, encouraged linguists to work with primary (digital) data, and, more broadly, raised public awareness of language endangerment.

These activities are now needed more urgently than ever, as in most areas of the world the pressure on local communities to shift to major languages has increased, and language maintenance activities are often insufficient to prevent language shift. Yet, it may seem that Language Documentation is already over its peak, and national or regional uptake through funding, establishing dedicated centres and academic chairs, or proactive language policies has overall been slow.

Under this theme, we invite papers that reflect on current practices in Language Documentation as a part of efforts to counter language endangerment, its impact in the academic sphere, and its contribution to language vitality and linguistic diversity.

THE CALL IS NOW CLOSED

This 3-day event aims to focus on endangered languages and their relation to the territory, including novel cartographic and visual means for representing the complex multilingual language landscapes. We also invite reflections on the development of Language Documentation as a field. We invite abstracts for papers on the following subtopics (this is not an exclusive list):

·         Endangered languages and their territory

·         Development of and perspectives for Language Documentation as a field

The abstracts should be in English, no longer than 500 words, must include 3 to 5 keywords and be sent as Word or PDF to vimiuc@hi.is and n@ostler.net by 20 May 2018 extended to 27 May 2018.  In the body of the email, but separate from the abstract, please include the following information:

Each presentation will be assigned 30 minutes: we recommend allowing 5 to 10 minutes of this time for questions and discussion.

Accepted authors are expected to submit a paper for the Proceedings in advance of the conference.

Registration and Fees
Fees and registration
The conference fee includes conference materials and coffee-breaks. Accommodation, transport from/to
airport and/or hotels and conference dinner are not included.
If we have enough registrations, lunch and possibly dinner will also be included. This will be announced
here as soon as we reach the respective critical numbers.
Registration deadline is 12 August for regular registration; early bird registration end on 10 July.
Regular Fee

Reduced 30,000 ISK                     (payment link here)
Standard 36,000 ISK                     (payment link here)
Reduced w. dinner 36,000 ISK      (payment link here)
Standard w. dinner 42,000 ISK      (payment link here)
One Euro is roughly equivalent to 122 Icelandic Kroner; one US dollar is roughly equivalent to 100
Icelandic Kroner.
Reduced fees apply to students, unwaged persons, FEL members, V.F. Institute members.
Please state clearly in the “comments”-field of the payment form if a reduced fee applies, and why.
Students need to certify that they are currently enrolled at a university, college, etc. Please email a copy
of your student ID or similar document to vimiuc@hi.is.
FEL members need to indicate their Membership ID in the “comments”-field of the payment form. In order to be eligible for the discount members have to be paid up for the year 2019. Those who are already a member can just renew for 2019, those joining now will join for 2019 but membership will be effective immediately.
Please note that you must be a FEL member in order to present at the conference.
Please check your membership status, renew your membership or join as a new member here:
http://www.ogmios.org/membership/index.php
Details about the conference dinner will be announced soon.
The conference fee can be paid by credit card only. To register and pay the conference fee, please click at the respective links above.
Day tour
Sightseeing day tours are available for Sunday the 26th.
Further details and prices can be found HERE.
Please take this into account when booking the flights and hotel.
Cancellation policy

Cancellation of your registration is possible by August 15th, please inform us at vimiuc@hi.is.The following cancellation fees apply:

No cancellation fee applies to the payment for the dinner before August 20th; then no refund is possible.

Preliminary programme can be found HERE.

Closest bus-stops are Háskólabíó, Hótel Saga and, somewhat further away, Háskóli Íslands or Hagatorg.
The Building is connected with the main buildings of the university campus via a tunnel to the Háskólatorg building.

Tourism in Iceland has grown immensely and moderately-priced lodging is quick to fill up. We encourage conference participants to book accommodation as early as possible to avoid high prices and limited availability. Websites such as Booking.com and Airbnb.com will provide information about a range of accommodation possibilities. For more information about hotels and other types of lodging in Reykjavik, see HERE.

Keflavík International Airport (KEF), the main airport in Iceland, is located 40 kilometers from Reykjavík, the capital city. Over 20 airlines offer flights to and from Iceland through the airport. For information about flights to Iceland, see HERE.

Transportation to Reykjavík from the airport is available by bus, Flybus or taxi, see HERE.

The only public transportation in Reykjavík is the bus system, commonly called Stræto. See their website for information about fares, timetable, and a route planner, HERE.

For a map of the University of Iceland see HERE.

The Internet can be accessed through Eduroam on the University premises.

The official currency in Iceland is ISK (Icelandic krona). Recognised credit/debit cards are accepted in all restaurants, shops, hotels and cash machines. For the official exchange rate of ISK towards major currencies, see HERE.

The native language in Iceland is Icelandic, but English is widely used.

On Sunday, 26 August, the day after the regular programme of the conference, participants and partners/guests are offered the opportunity to participate in one of two excursions to a special price (thanks to Troll Expeditions for the support).

One excursion is the notorious “Golden Circle”. If this is your first time in Iceland, this tour is a popular standard, leading you to some of the most famous sites and attractions in Iceland: Þingvellir, Geysir, and Gullfoss, besides an additional visit to the Kerið volcano crater and an interesting Icelandic farm.

The other excursion goes to the South Coast to a number of stunning sites like waterfalls and a marvelous black beach, and includes a hike on the Sólheimajökull glacier. 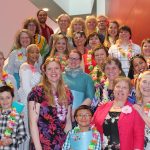