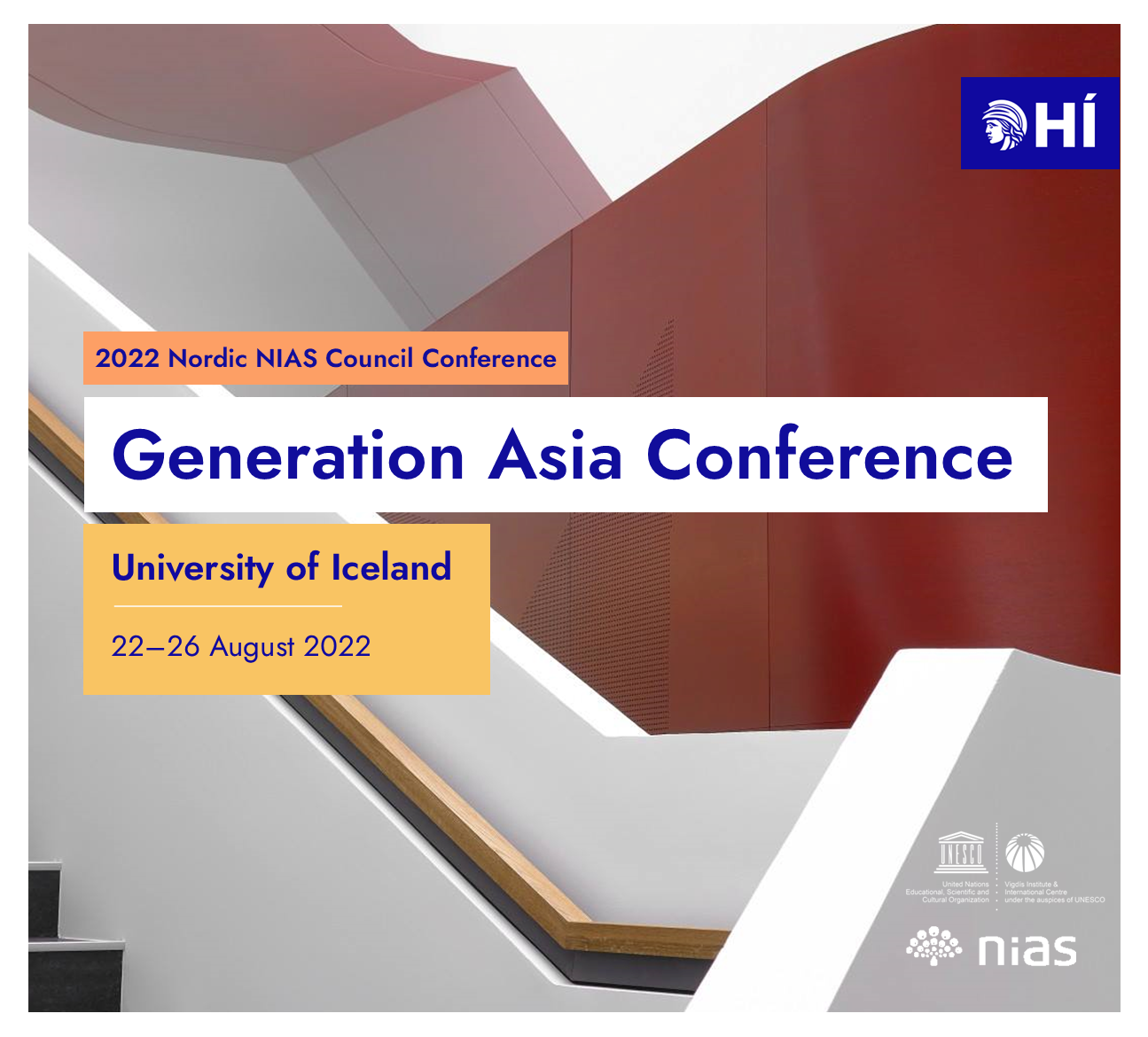 How is generational change transforming society, culture and politics across Asia? Does a creative, iconoclastic Generation Z pose a major challenge to traditional hierarchies and values? What is the impact of demographic change in countries with a rapidly aging population? Is there something we can learn from Asian traditions of intergenerational exchange?

These and many other intriguing questions arise from the theme of the 2022 NNC conference.

As always, we welcome papers and panels on all aspects of Asian studies, not limited to the conference theme, from across the humanities and social sciences.

The 2022 Nordic NIAS Council conference will be organized by the Vigdís Finnbogadóttir Institute for Foreign Languages at the University of Iceland, Reykjavík, in collaboration with the Nordic Institute of Asian Studies:

Inquiries regarding the conference: gen.asia@outlook.com

Please inform us if you are also planning to attend the upcoming EACS Conference (European Association for Chinese Studies) on 24–27 Aug 2022. In such case we can schedule your session on day one or two in the Reykjavík program.

The conference is sponsored by:

NIAS and the Vigdís Finnbogadóttir Institute for Foreign Languages at the University of Iceland are inviting proposals for individual papers for our Generation Asia 2022 Nordic NIAS Council (taking place from 22 – 24 August) as well as applications for the PhD workshop (25 – 26 August).  Note that all proposals should be submitted by 22 April 2022 (Friday) to gen.asia@outlook.com

We will be running a Ph.D. workshop in conjunction with the 2022 NNC Conference. The Ph.D. workshop is open to students currently enrolled for a doctoral degree. Applications are welcome from students of any nationality who are enrolled at any university. However, we do prioritise applicants affiliated with member institutions of the Nordic NIAS Council.

While we hope to receive some applications on topics related to the conference theme of Generation Asia, we accept proposals in any fields of Asian studies. We expect to enroll around 12 students in the workshop, who will be expected to be present for all workshop sessions, and be ready to provide detailed feedback on the papers presented. The main focus of the workshop is on intensive review of student papers, but additional sessions will be included on career developments and getting published. Following the same format as our very successful 2020 and 2021 NNC PhD workshops, each paper will be discussed by two established academics, as well as one student peer discussant.

In order to apply for the workshop, you’ll need to submit a title, an abstract (should not exceed 300 words) outlining your PhD topic, as well as a CV, a cover letter explaining which year you are in the PhD programme, and a recommendation letter from your supervisor. You should present a paper based on one chapter of your thesis. If accepted you will need to submit a full paper of 6,000 to 10,000 words, one month before the conference. Of course, participants in the Ph.D. workshop are also welcome to take part in the conference, if both their proposals accepted.

Accommodation from Wednesday to Saturday (3 nights) will be provided to participants of the PhD workshop. See more information about the Ph.D. workshop here.

For any other questions, please contact gen.asia@outlook.com or visit the conference’s website.
Deadline: Friday, 22 April 2022
Organizer: Nordic Institute of Asian Studies, Vigdís Finnbogadóttir Institute for Foreign Languages at the University of Iceland 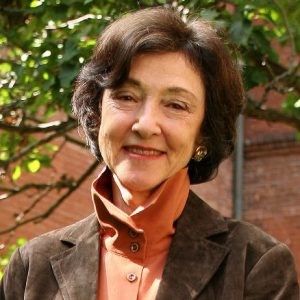 Carol Gluck specializes in modern Japan, from the late nineteenth century to the present; international relations; World War II, and history-writing and public memory in Asia and the West. She received her B.A. from Wellesley (1962) and her Ph.D. from Columbia (1977). She is a fellow of the American Academy of Arts and Sciences and the American Philosophical Society; former President of the Association for Asian Studies; currently co-chair of the Trustees Emeriti of Asia Society and member of the Board of Directors of Japan Society. She is a founding member and past chair of Columbia’s Committee on Global Thought. 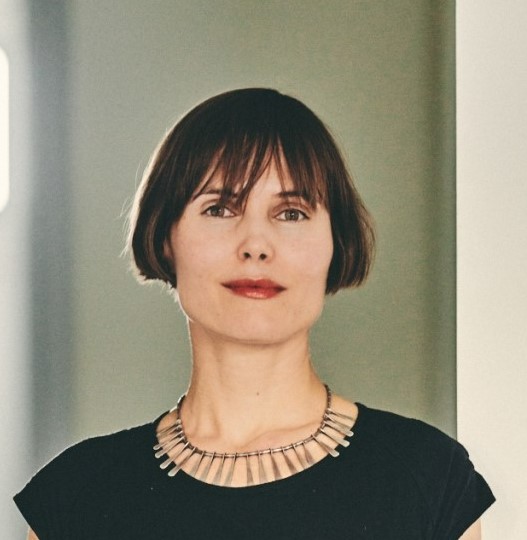 Chelsea Szendi Schieder is a historian of contemporary Japan, focusing on social movements and gendered politics, she writes about protest, women, violence, and Japan for academic and more general audiences. After earning her Ph.D. in East Asian Languages and Cultures and History at Columbia University in 2014, she worked at Meiji University and is now Professor in the Department of Economics, Aoyama Gakuin University. She published her first book in 2021, entitled Coed Revolution: The Female Student in the Japanese New Left (Duke University Press). 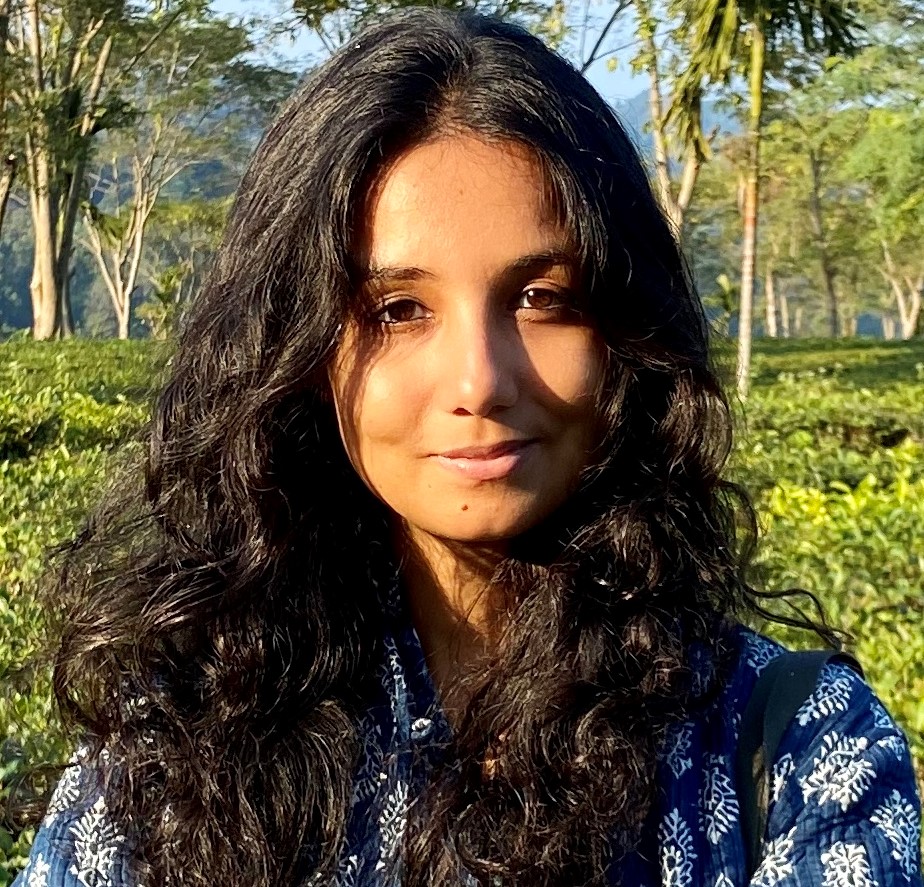 Jasnea Sarma is a feminist political geographer and ethnographer of borderlands and frontiers on the interconnected geographies of India, China, and Myanmar (Burma). She writes on themes of violence, militarised territorialization, illicitness, resource extraction, migrations, escape, surveillance, indigenous imaginaries and climate change on such spaces. She received a Ph.D. (2020) in Comparative Asian studies and postdoctoral fellowship (2021) in South Asian Studies from the National University of Singapore (NUS). She is currently a senior researcher and lecturer of Political Geography at the University of Zurich (UZH) in Switzerland. She is from Assam (India) and conducts fieldwork in Mandarin Chinese, Assamese, Hindi, Bengali, Nagamese, as well as some Burmese.

Jóhann Páll Árnason is emeritus professor of sociology at La Trobe University, Melbourne, and an associate of the Department of Historical Sociology, Faculty of Human Studies, Charles University, Prague. He has taught at universities in Germany, Australia, France and the Czech Republic. His research interests centre on historical sociology, with particular emphasis on the comparative analysis of civilizations; his main work on that subject is Civilizations in Dispute, Leiden and Brill 2003. He holds an honorary doctorate from the University of Iceland. In 2021, he was elected a member of the Academia Europaea.

If you need a formal receipt for your payment, please contact gen.asia@outlook.com

In case you need to cancel your participation, a 70% refund can be provided until July 31. After that the fee will become non-refundable.

Note that some refreshments will be served at the conference. More practical information regarding the program will be provided in the coming weeks.

Each panel session is 80 minutes. Panelists have approximately 15 minutes for their presentations, although length may vary slightly depending on the number of participants per panel. The Chair is responsible for keeping each presenter, and the overall panel, within the specified timeframe. Questions and comments from the audience are welcome. Hence, it is important to leave sufficient time for discussion, between or after the presentations. The panel Chair is responsible for the session to finish on time.

It is important that presenters bring their slides/PPTs on memory stick or have them easily available by other means. Presenters are encouraged to use the coffee break before their session to get slides ready so that all panels can start on time.

Panels and presenters with lecture titles

Up-to-date information about COVID-19 for travelling to Iceland is available HERE.

The plan is to hold the conference as an in-person event at the University of Iceland if the covid situation allows for it.

University of Iceland campus is within walking distance from many hotels and accommodation options in downtown and west Reykjavík.

Tourism in Iceland has grown immensely and moderately-priced lodging is quick to fill up. We encourage conference participants to book accommodation as early as possible to avoid high prices and limited availability. Websites such as Booking.com, Expedia.com, and Airbnb.com will provide information about a range of accommodation possibilities. For more information about hotels and other types of lodging in Reykjavik, see HERE.

Keflavík International Airport (KEF), the main airport in Iceland, is located 40 kilometers from Reykjavík, the capital city. Over 20 airlines offer flights to and from Iceland through the airport. For information about flights to Iceland, see HERE.

Transportation to Reykjavík from the airport is available by bus, Flybus or taxi, see HERE.

The only public transportation in Reykjavík is the bus system, commonly called Stræto. See their website for information about fares, timetable, and a route planner, HERE.

For a map of the University of Iceland see HERE.

The Internet can be accessed through Eduroam on the University premises.

The official currency in Iceland is ISK (Icelandic krona). Recognised credit/debit cards are accepted in all restaurants, shops, hotels and cash machines. For the official exchange rate of ISK towards major currencies, see HERE.

The native language in Iceland is Icelandic, but English is widely used.

The conference will take place in Veröld – the House of Vigdís, which is located on the campus of the University of Iceland. The conference rooms are on the bottom-level of the building. On the opening day there will be an information desk in Veröld from 9:00 to 12:00. The conference program starts at 12:30. His Excellency Guðni Th. Jóhannesson, President of Iceland will give the opening remarks so please arrive at the venue on time.

Coffee breaks in Veröld and lunches at Háskólatorg (“the University Square”) on Tuesday and Wednesday are included in the conference fee. Followed by Professor Emeritus Jóhann Páll Árnason´s lecture, we are happy to invite you to a welcome conference at 4 PM on Monday (August 22) at the Nordic House, which is also located on the university campus. The reception is sponsored by the Scandinavia-Japan Sasakawa Foundation. Further, we are pleased to invite all registered participants to a conference dinner at Hotel Saga (next to Veröld) at 6 PM on Tuesday (August 23). The dinner is sponsored by the Chinese Embassy in Iceland. Please wear your conference badges to all social events. 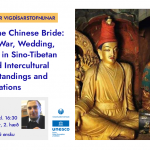 The Tale of the Chinese Bride: Remarks on War, Wedding, and Worship in Sino-Tibetan Relations and Intercultural (Miss)understandings and (Re)interpretations 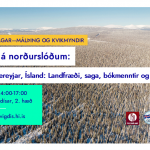