Some of the world’s leading experts and scholars on endangered languages, language documentation and language revitalization came together at the FEL Conference XXII – Endangered Languages and the Land, held 23–25 August in Veröld – House of Vigdís at the University of Iceland in Reykjavík. The 3-day event was dedicated to endangered languages and their relation to the territory, with a special focus on novel cartographic and visual means for representing the complex and multilingual language landscapes.

Organised by The Vigdís International Centre for Multilingualism and Intercultural Understanding, the conference was held in collaboration with The Foundation for Endangered Languages.

Mme. Vigdís Finnbogadóttir, UNESCO Goodwill Ambassador for Languages and former President of Iceland gave an opening speech at the conference and was followed up by mme. Eliza Reid, first lady of Iceland. Keynote speakers were Claire Bowern from Yale University, Jost Gippert from the Goethe University in Frankfurt, Jeff Good from the University at Buffalo and Kristine A. Hildebrandt from Southern Illinois University in Edwardsville.

The participants agreed that this was a truly engaging event with lots of discussions and interactions.

A publication of the conference proceedings will follow shortly. 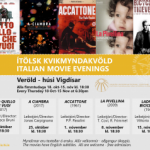